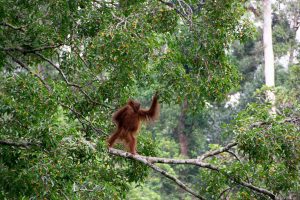 “I’m honoured to have that photo place in the Virtuoso Travel Photo contest,” says Krill, independent owner of the TPI-affiliated KLK Travel, “and to be able to share my special moment with others as it hangs in the Bellagio gallery at Virtuoso Travel Week!”

Krill’s photo was taken while on a Silversea Expedition cruise last September in Sumatra. Krill went on a 3 am trek along the mountain for 5km, until she rounded a corner and found a mother and baby orangutan hanging out in a tree. Two kilometres later, she saw a large male orangutan walk on a tree branch to collect fruit. This was the image captured and shared in the Virtuoso Photo Contest.

TPI says it’s proud to have one of their own advisors awarded for capturing the special moment, titled “Wild Orangutan Getting Fruit.”